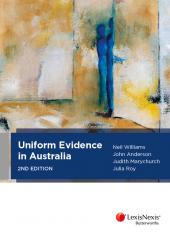 This book contains a comprehensive multi-jurisdictional commentary and annotation to the uniform Evidence Acts, now the prime source of evidence law in the Commonwealth, New South Wales, Victoria, Tasmania, the Australian Capital Territory and Northern Territory. It offers a user-friendly approach that combines commentary on the operation of the uniform Acts in each jurisdiction with a synthesis of the large body of cases, rules and related legislation. Understanding of the Acts’ operation and interpretation is further enhanced by reference to the common law principles that are enshrined in, replaced or supplemented by individual provisions. Commentary is extensively cross-referenced to other relevant provisions and relevant practice notes, examples and a useful Glossary are provided.

The second edition has been fully revised and updated. Significant developments include:

View all books by Neil Williams (1)

View all books by John Anderson (2)

View all books by Julia Roy (2)

View all books by Judith Marychurch (3)