The Federal Judicature: Chapter III of the Constitution, 2nd edition

The Federal Judicature: Chapter III of the Constitution, 2nd Edition The second edition has been fully revised to include developments since 2010 such as:

James Stellios is a Professor at the ANU Law School. His primary research and teaching interest is constitutional law, particularly in the area of Ch III of the Constitution. He is also a barrister at the NSW Bar and appears as counsel in constitutional cases. Prior to joining the ANU in 2001, he spent a number of years in legal practice working for the Attorney-General’s Department and the Australian Government Solicitor, principally in the area of constitutional litigation, including a period as Counsel Assisting the Solicitor-General of the Commonwealth.

View all books by James Stellios (3) 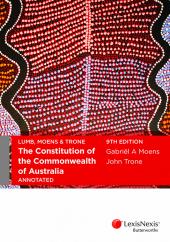