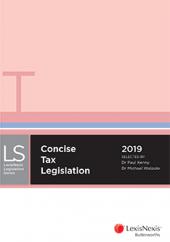 LexisNexis Concise Tax Legislation 2019 offers readers a consolidation of extracts from the most widely used tax statutes as well as an overview of the taxation system. Selected by experts in the field, the extracts are consolidated into a single volume, making it a concise and portable resource for students and practitioners alike.

Dr Paul Kenny is a former Associate Professor in Taxation Law at Flinders University, a past President of the Australasian Tax Teachers Association, a member of the Institute of Company Directors and a Chartered Accountant.

View all books by Paul Kenny (5)

Dr Michael Walpole is a Professor and Head of School at the School of Taxation and Business Law, UNSW Business School, University of New South Wales

View all books by Michael Walpole (4)