Security of Payment NSW, Victoria, ACT, Tasmania and SA provides comprehensive annotations of the relevant legislation, together with the current law and interpretation of any particular provision. 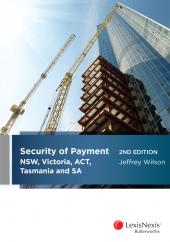 ‘…There is no doubt that this contribution to the sparsely available material in this area will be of great interest and assistance to the very many principals, contractors, adjudicators, consultants, lawyers, courts and others advising on, or dealing with, payment claims…’

This second edition has been expanded to cover the ACT, Tasmania and South Australia in addition to New South Wales and Victoria and provides a comprehensive examination of all the case law which has interpreted the Building and Construction Industry Security of Payment Acts in these states.

Jeffrey Wilson is an experienced construction lawyer having practised almost exclusively in this area for over 30 years. A former partner in the Construction and Engineering Group at Norton Rose Fulbright Australia, he has taken a particular interest in the security of payment legislation since it was introduced in New South Wales in 1999, and is the co-author of the Building and Engineering Contracts chapter of The Australian Encyclopaedia of Forms and Precedents.

View all books by Jeffrey Wilson (1)