Essential reading for members of the judiciary, barristers and solicitors Australia wide as well as students of commercial law, equity and remedies. 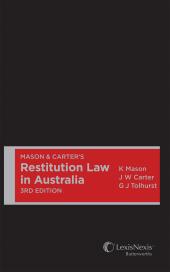 Restitution is one of the law’s few remaining commons, largely untouched by statute.

Fifty years ago restitution was a wilderness, an apparent ‘miscellany of disparate categories’ through which litigant, judge and student trudged holding a compass marked ‘implied contract’ at its four points. The landscape of the modern Australian law of restitution, however, is complex. The topic of restitution addressed by the authors includes doctrines responding to different and/or additional policies as well as gain-based remedies appurtenant to wrongs with their juridical source outside unjust enrichment, which is only one of the bases for restitution.

In this third edition, the content has been revised and updated. Chapter 3 (Want of Title) has been substantially updated and Chapter 24 (Change of Position) has been completely rewritten.

This book is essential reading for members of the judiciary, barristers and solicitors Australia wide, as well as students of commercial law, equity and remedies.

'An excellent, accessible account of the modern law of restitution in Australia which will prove to be of enormous benefit to practitioners in Australia and which can be read with profit by all lawyers with an interest in this fascinating subject' [(1996) 112 Law Quarterly Review 691].

Emeritus Professor John Carter is Australia’s leading authority on contract law. He is the author of several highly regarded works on contract law and has taught contract law for over 30 years. He has an international reputation and has published in many leading journals. General Editor of the Journal of Contract Law, Professor Carter is also a consultant to Herbert Smith Freehills. He is a Fellow of the Australian Academy of Law.