Essential resource on public law for students and practitioners 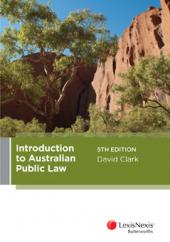 Areas of law covered include the role of public international law in Australian public law, Election law, the Ombudsman office, human rights as well as state legislative power and executive power. Each chapter has suggested study questions and a select list of further reading.

David Clark is a Professor of Law at Flinders University and has authored five books and over 60 academic papers. David has taught in Hong Kong, New Zealand and in Australia. He has published on the law of Habeas Corpus in which field he has also consulted as well as being cited in the courts of four common law countries. David’s main field of research is constitutional history and he is currently writing on Magna Carta in the Commonwealth for the American Bar Association.

View all books by David Clark (1)