Defamation Law in Australia commences with a colourful historical analysis of defamation action in England and Australia, before providing an in-depth commentary on the general underlying law, principles and concepts.

Defamation Law in Australia commences with a colourful historical analysis of defamation action in England and Australia, before providing an in-depth commentary on the general underlying law, principles and concepts.

This updated edition has been revised to reflect changes in legislation and case law, including an analysis of major decisions relating to publication on the internet, defences of truth and contextual truth, and awards of damages. It addresses developments in invasion of privacy law in Australia and explores topical issues such as disclosure of confidential sources and reform of the Defamation Act after more than 10 years operation.

The Defamation Act is fully reproduced as an Appendix, together with a Comparative Table of Defamation Statutes, contrasting previous legislation in each State and Territory with the uniform Act.

Patrick George is the Senior Partner of the Australian office of Kennedys. He has acted for many high profile plaintiffs and media defendants in defamation and privacy matters over a 30 year period. Patrick is also the general editor of Social Media and the Law which is now in its second edition. He has recently advised on a number of social media cases.

View all books by Patrick George (3) 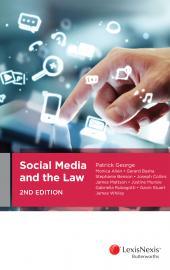