Cross on Evidence, 12th Edition is a detailed and authoritative analysis of the rules of the law of evidence in Australia 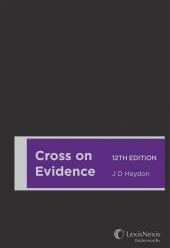 Now in its twelfth edition, this fully updated prestigious text, written by the Honourable J D Heydon AC QC, provides a detailed and authoritative analysis of the rules of the law of evidence in Australia. It contains explicit statements of doctrine together with an exposition of the principles underlying the various rules. It is the only significant Australian text which covers the entirety of the law of evidence in Australia, both in the uniform jurisdictions and the states which have separate regimes.

The Honourable J D Heydon AC QC is a former Justice of the High Court of Australia. He was appointed to the Court in February 2003, after having been a Judge of the New South Wales Court of Appeal since 2000. After leaving the High Court in 2013, in 2014-2015 he served as the Commissioner of the Royal Commission into Trade Union Governance and Corruption. He has published a number of legal texts, including his first book The Restraint of Trade Doctrine, in 1971.

View all books by The Honourable JD Heydon AC QC (6)