LexisNexis Concise Tax Legislation 2019 offers readers a consolidation of extracts from the most widely used tax statutes as well as an overview of the taxation system. Selected by experts in the field, the extracts are consolidated into a single volume, making it a concise and portable resource for students and practitioners alike.

Associate Professor Paul Kenny is an Adjunct Associate Professor with Flinders University. He has a Bachelor of Economics, Master of Taxation Law and Doctorate of Juridical Science and has worked in a broad range of accounting and taxation law settings. He has received numerous teaching and research prizes at Flinders University and is a member and past President of the Australasian Tax Teachers Association, a Member of the Taxation Research Network, UK and a Chartered Accountant.

View all books by Paul Kenny (6)

Professor Michael Walpole is Head of School in Tax and Business Law at the University of NSW. Michael started out as a lawyer in private practice. He has completed a PhD at UNSW on the subject of Taxation of Goodwill. He is an International Research Fellow at the Oxford University Centre for Business Tax. As an academic for more than 25 years, he has been awarded the Hill Medal by the Australasian Tax Teachers Association (ATTA) for his contribution to tax teaching and is a past President of ATTA

View all books by Michael Walpole (4) 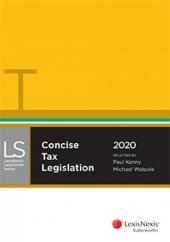