An essential resource for students and practitioners, Hanks Australian Constitutional Law is the authoritative casebook for the study of constitutional law. Updates for this edition include the two Williams cases in which the High Court reworked the executive power of the Commonwealth to contract and spend; recent cases developing the Kable principles and considering the validity of State laws against Chapter III implications; important recent cases on the implied freedom of political communication; recent cases on s 92 of the Constitution dealing with internet trade and commerce.

Dan Meagher is an Associate Professor at the School of Law, Deakin University. His research interests are in constitutional law, human rights law and statutory interpretation.

View all books by Dan Meagher (1)

Amelia Simpson is an Associate Professor at the ANU College of Law, Australian National University. Her research and publishing has focused on domestic and comparative constitutional law and interpretation, with a particular interest in federalism and non-discrimination as a principle of intergovernmental relations.

View all books by Amelia Simpson (1)

James Stellios is a Professor at the ANU Law School. His primary research and teaching interest is constitutional law, particularly in the area of Ch III of the Constitution. He is also a barrister at the NSW Bar and appears as counsel in constitutional cases. Prior to joining the ANU in 2001, he spent a number of years in legal practice working for the Attorney-General’s Department and the Australian Government Solicitor, principally in the area of constitutional litigation, including a period as Counsel Assisting the Solicitor-General of the Commonwealth.

View all books by James Stellios (3)

Fiona Wheeler is a Professor in the ANU College of Law, ANU. Her research is primarily in the area of constitutional law, with a particular interest in courts and the judicial system and the history of the High Court of Australia.

View all books by Fiona Wheeler (1) 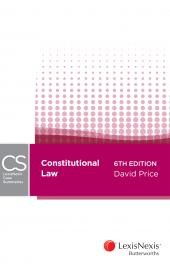