The Trials of Justice Murphy (eBook)

An interesting mix of legal and political history, this book delves into the story of how it came about that Lionel Murphy, one of Australia’s most senior judges, was once accused of putting his freedom, and the reputation of the High Court, in jeopardy to help a friend. 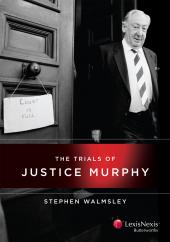 October 2016 marks thirty years since the death of former High Court Justice Lionel Murphy, a controversial legal and political figure who despite his many achievements is perhaps best known for being charged with attempting to pervert the course of justice.

The book takes an in-depth look at the unique story of how Murphy, a High Court judge at that time, was charged with serious criminal offences, found guilty of one and subsequently sentenced to imprisonment. The book examines the first trial in depth, turning then to the appeal and second trial, at which Murphy was acquitted. Facing a further inquiry, Murphy was diagnosed with a terminal illness, but controversially returned to sit as a judge, delivering his last judgments just an hour before he died.

Follow the fascinating story of how it came about that one of Australia’s most senior judges was once accused of putting his freedom, and the reputation of the High Court, in jeopardy to help a friend.

Stephen Walmsley is a retired judge. Practising in both Sydney and Canberra, he has had a long and successful legal career, becoming a solicitor in 1970, a barrister in 1981, and taking silk in 1997. In 2001 he was appointed a judge of the District Court of New South Wales, later presiding over many criminal and civil trials. At various times he has served as an acting judge of the Supreme Court of New South Wales and of the Supreme Court of the Australian Capital Territory. He has also written extensively in the field of professional liability.

View all books by Stephen Walmsley (1)