Malcolm Holmes QC is a Senior Counsel and Chartered Arbitrator with chambers at Eleven Wentworth, Sydney and 20 Essex St, London. He has a wide ranging practice, encompassing trade practices, equity, general commercial law and common law. He is also currently an Adjunct Professor at the University of New South Wales and the University of Queensland.

Chester Brown is Professor of International Law and International Arbitration at the University of Sydney Law School, and the Co-Director of the Sydney Centre for International Law. He is also a Barrister at 7 Wentworth Selborne Chambers, Sydney, and an Overseas Associate of Essex Court Chambers, London, and Maxwell Chambers, Singapore.

View all books by Chester Brown (1) 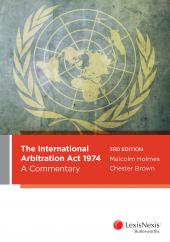