Criminal Law in Australia, 2nd edition is an engaging introduction to criminal law in all Australian jurisdictions Criminal Law in Australia provides a clear and accessible introduction to the substantive criminal law in all states and territories of Australia.  It encompasses general principles of criminal liability, the major categories of criminal offences, liability for attempts and accessorial liability and concludes with a discussion of the major defences. Interesting scenario problems with suggested responses demonstrate the application of the law in practice. Although primarily written for students, this book is a useful resource for anyone seeking to understand criminal law in Australia.

The second edition has comprehensively updated coverage for all Australian jurisdictions, including the following developments:

Lorraine Finlay is a lecturer in the School of Law at Murdoch University.

View all books by Lorraine Finlay (2)

Tyrone Kirchengast is an Associate Professor in Sydney Law School, The University of Sydney. 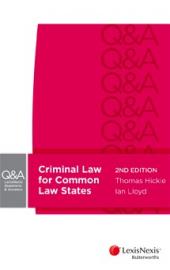